Recent research shows that the way you greet your dog after a short or long separation makes a huge difference to the dog.

Whenever I return home or come down the stairs after a night’s sleep and encounter one or more of my dogs, I go through a bit of a greeting ritual. This involves first making direct eye contact and then talking to the dog (or dogs) in a happy voice and using their names.

At the same time, I am touching and patting or stroking them on the head and flanks. I developed this habit partly because it makes me feel good and the dogs seem to respond positively, but also because back in the 1960s and 1970s, the psychologist Harry Harlow did an extensive series of studies that showed that touching was an important part of establishing warm and affectionate bonds between individuals.

His work began with research on mother monkeys and their offspring, however, the research soon expanded outward when it was shown that it applied to humans as well. He demonstrated that the depth of love that a child has for his or her mother is partly due to the amount and quality of touching that the child and the mother engage in.

The touching can be deliberate, such as hugging, or as a byproduct of other activities such as grooming the child—brushing their hair, helping to wash their faces and so forth—or it can be almost unconscious as when the mother simply places a hand on the child’s shoulder or pats them on the head when passing their chair. The cumulative effect of all of this touching is a strong affectionate bond.

A practical extension of his findings is that clinical psychologists who work with married couples undergoing difficulties in their relationships or with families under stress are trained to observe whether or not the individuals casually touch each other during therapy sessions. If there is such touching, even a light brushing together of hands, it is a positive sign that indicates that there is still a measure of affection and emotional bonding present that can serve as a foundation for healing and strengthening the relationship.

Some new research published in the journal Physiology and Behavior confirms the importance of touching—but this time the study looked particularly at the emotional responses of dogs when a familiar person greets them after a period of separation.

The investigation was done by Therese Rehn, Linda Handlin, Kerstin Uvnäs-Moberg, and Linda J. Keeling, researchers from the Swedish University of Agricultural Sciences in Uppsala who conducted a study on 12 Beagles. The idea was to mimic the typical situation where you leave the house and then return home after a period of some separation from your dog. The general setup involved a familiar person leaving the dogs in a test area for 25 minutes and then returning. Dogs are not great at discriminating length of time and anything over around 15 minutes is interpreted by our pets as a “long time.” When the familiar person exited, the dogs were alone in the area, accompanied only by an unfamiliar veterinary student who (except when called upon to draw blood samples) sat quietly and did not interact with the dogs. We know that even though the dogs were familiar with the area in which they were left, this was potentially a stressful period of separation; research has shown that stressed dogs are comforted by, and often seek the presence of, a familiar friendly person, but, unfortunately for the dog, there was no such person around.

When the familiar person returned after the separation, the manner in which she was supposed to greet the dog was scripted. In one condition, the familiar person greeted the dog by talking to it in a friendly tone of voice and petting it gently. In another condition the same verbal greeting was given but the dog was not touched. Finally, in a control condition the individual did not greet the dog in any way, but simply entered the room, sat down on a chair, and began to read a magazine.

Obviously we can’t ask the dogs about their feelings, however there are now methods to determine their emotional state scientifically. In this particular study the experimenters measured the emotional response of the dogs using a technique that is becoming more common among behavioral researchers. It involves determining the amount of oxytocin released into an individual’s blood stream. The hormone oxytocin is produced in our bodies in various social situations, and it is sometimes referred to as the “love hormone” since our bodies release it at high concentrations during positive social interactions such as falling in love, experiencing an orgasm or breastfeeding. An increase in the amount of oxytocin is believed to be an indication of an individual experiencing positive, affectionate feelings.

In addition, the researchers looked for another hormone that reflected the flip side of the coin, namely the amount of stress that the dogs were feeling. This involved measuring the concentration of cortisol in the blood. Cortisol is often referred to as a “stress hormone” since it appears in times of unease, fear, tension, or anxiety.

The results were rather straightforward. At the sight of the familiar person returning, the dogs became more active, with tails wagging. The sight of that familiar person was obviously a positive event since the concentration of oxytocin in the dogs’ blood increased and the concentration of cortisol decreased simply because the dogs could now see the familiar person returning to them. When the familiar individual greeted the dog using both their voice and touch, the increase in oxytocin was much higher than when the greeting involved just voice alone; likewise, the drop in cortisol levels was sharpest when the person used both voice and touch in their greeting.

An interesting feature of the data was, when voice and touch were used together, the positive emotional effects persisted for a long time after the actual greeting. The positive change and emotion dissipated much more quickly when the dog was greeted only by speaking, and most quickly when the returning familiar person did not interact with the dog at all. In this last condition where there was no social interaction, the dogs actually seemed bothered and would often wander over to the unfamiliar person in the room to try to make physical contact with them. Thus it seems that although the sight of a familiar person is a positive event for a dog and the sound of that person’s voice is better still, it is actually the sensation of being touched that helps to boost the good feelings experienced by the dog and allows those good feelings to carry forward from the moment when dog and loved one reunite.

For this reason I will continue to greet my dogs by bending down to touch them even though my current physical state and the fact that my dogs are small makes that action a bit painful for me. The positive emotional effect on the dogs is more important to me than the momentary aching that I get from my old arthritic bones. 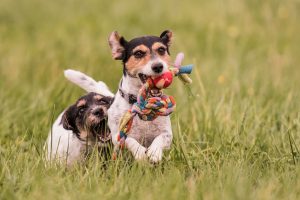